What are Combat Styles?

Combat Styles represents the newest way to play SWTOR by separating your story and gameplay. The way you pick your combat styles works differently for new and veteran players. During character creation, both types of player choose their origin story (knight,consular,agent,bounty hunter etc). Then, you pick your first combat style from a pool of all the tech classes if you chose a tech based origin story (bh, agent, smuggler, trooper), or force classes if you chose a force based origin story. Your base class, now called an origin story, no longer dictates any of the abilities you gain. Your abilities are solely determined by your current active combat style - the new term for advanced class.

The way you gain access to certain combat styles differs for new and veteran players. New players will not be allowed to choose mirror faction force classes for their first character. This means a jedi knight cannot pick the sith sorcerer, assassin, marauder or juggernaut combat styles at level 1. If however, you have unlocked the Dark 5 and/or Light 5 legacy achievements, any character you make - even a new one at level 1 - will gain access to the opposite faction's force classes. This does not matter for tech classes as there are no restrictions. If you choose a force combat style and later while playing, that specific character reaches the max alignment associated with the opposite faction, they will be given the choice to change their combat style to the opposite faction's mirror class. In practice this means if your jedi knight origin story who has chosen a jedi sage combat style reachs dark 5, you can swap your sage combat style for the sith sorcerer combat style.

Subscribers will have access to two (2) combat styles. Your combat style choices are permanent. Once you have chosen them, you will not be able to change them with the exception of reaching a high enough alignment and being offered the mirror combat style. Brand new players on their first character will not choose their second combat style til after they have reached or completed Act 3 of their origin story - this is to prevent information overload. For veteran players who have likely completed Act 3 numerous times, any new and current character will immediately be given the option to choose their second combat style when entering the game - even at level 1.

You can freely swap between your 2 combat styles with or without using the loadout system (detailed below) so long as you are out side a phase (operation, flashpoint, warzone). Likewise, you can swap between your disciplines within those combat styles the same way you can on live by using the field respecialization legacy perk or talking to the respec trainer on the fleet.


Pick your starting origin story (class in current terminology) for the story and your first combat style (advanced class) from the tech or force pool -> Then pick a second combat style depending on whether you have completed Act 3.

You will not be able to mix and match animations from mirrored specs.
Force based origin stories cannot pick tech based combat styles and vis versa. This is something the devs are open to exploring in the future and see combat styles as a step in this direction.

Loadouts allow you to save your current ability placements, gear, tacticals, current applied outfit and hotkeys to a loadout slot. Then when you swap loadouts with the press of a button, all of these things instantly change to a different saved preset. You will have maybe 4-5 loadouts depending on dev plans, subscription status etc - the exact number is yet to be confirmed but there will be more loadout slots than combat style slots. Loadout choices are NOT permanent and you can continuously update them as you change gear, outfits, abilities etc. Your loadouts are also not tied to any particular combat style, you could have 3 loadouts in one combat style for each of the three disciplines, you could even have multiple loadouts for a single discipline with different ABC choices and gear for pvp or pve.

While we don't know exactly what gearing will look like in 7.0, some aspects have been made apparent.
Current set bonuses will not work at level 80, the same way level 70 set bonuses don't work for level 75 characters.
Approximately 10% of combat tacticals that we use rotationally will be baked into base abilities. Some tacticals may remain in their current form, but don't expect them to.
The devs intend to create multiple new tiers of gear and the tiering system may continue throughout 2022 though nothing else was said about this.
New gear will appear on the PTS at a later stage.

The below statements and opinions are that of the developers and not my own. I have attached links to certain quotes for further reading.

Classes in 7.0 are being rebalanced as part of an initiative by the developers to make classes "feel less encumbered and customization more concise." This means that the amount of abilities available to each class will be reduced in order to make the relationships between active abilities and passive modifiers more immediately apparent. Streamlining features will also reduce the time needed to learn all of the new advanced classes you can now switch to. By setting a new baseline and reversing the arms race that resulted in high times to kill and large numbers of overlapping abilities, the devs will be able to balance things more easily and more quickly. It also opens up room to potentially add new combat styles in the future. In a follow up post, it was made known that this rebalancing also came about as a desire to reduce the quantity of defensive cooldowns as "it has made some PvE mechancics completely avoidable and made the time-to-kill metric in PVP grow steadily to the point where we are approaching tedious levels." Lastly it has been stated that NPC fights will be adjusted as needed to compensate for the lack of defensives.

While stun breakers and interrupts were missing from the first PTS cycle, it has been confirmed in the above quoted dev post that they will return, but might not return in the same form that we currently know them. This is again part of the initiative to streamline class features without the need for extra button presses.

Utilities are also being removed to make way for the new ABC ability system, so named because every few levels (currently 5) one of the following will occur. You the player will:

An example of this can be found in the PTS forum post for the Jedi Guardian where at level 10 in the Focus combat style, you gain the Focused Burst active ability.
At level 15 you choose either Blade Burst(A), Energy Barrage(B) or Saber throw(C). The first two being passives, the third being an active ability.
Again at level 20 you choose between 1 of 3 passives, while at level 70 you choose one ability between Saber Reflect(A), Blade Blitz(B) and Enure(C) - three abilities that all Guardians currently have on live. Each of these defensives currently include one or two of the current (live) utilities baseline - Saber Reflect has a 5 second duration, Enure cleanses hostile effects and Blade Blitz's cooldown is lower while also breaking immobilising effects. For those who don't play a Guardian, Saber Reflect has a 3s duration, Enure doesn't cleanse and Blade Blitz's cooldown is 10 seconds longer and doesn't break effects without utilities.

As a reminder, the availability of certain passives, abilities and their position in the ABC tree are all subject to change.

As of the third PTS patch, we can now see how we will be picking abilities/passives, and how we will swap between combat styles and disciplines. (Note, when switching between abilities, the cooldown does not reset. This prevents players from hotswapping and chaining long cooldown abilities together) 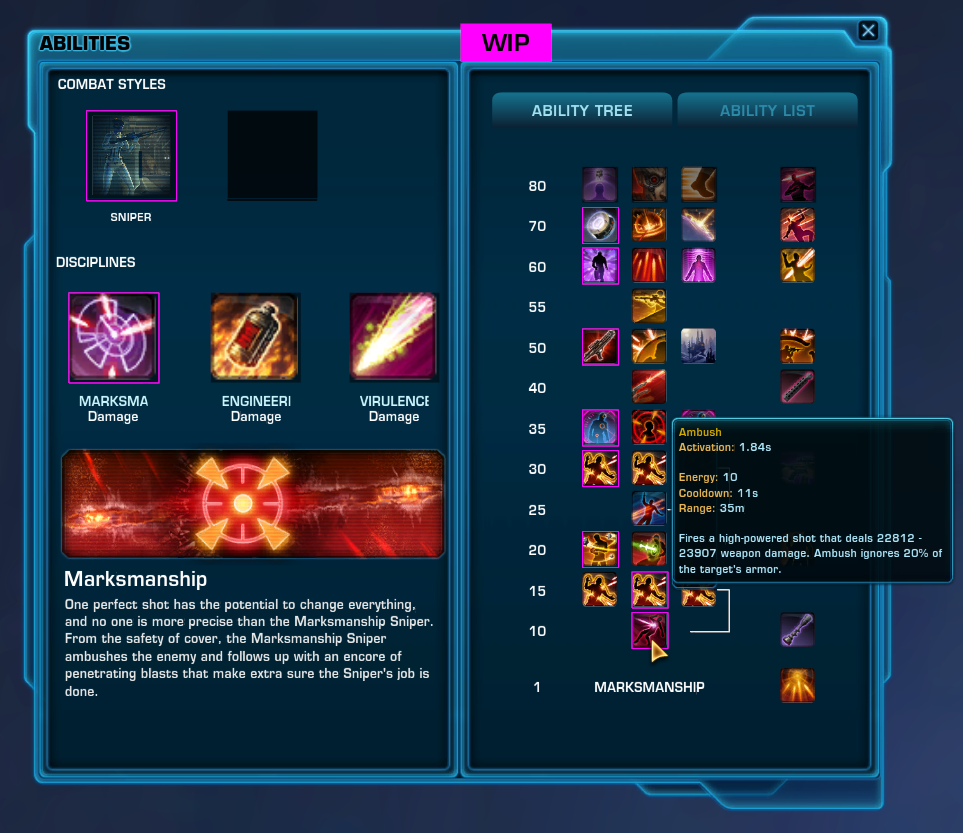 Below are listed the Combat Style ABC options each class currently has on PTS. Greyed out options are not yet available to test. Some choices were not yet made apparent and everything is subject to change on later PTS cycles. Mirror class ability lookup

WARNING This section is partially redundant as of the third PTS cycle which introduced the Operative, Sniper and the work in progress Abilities panel - which acts as a replacement for the old combat proficiencies panel. As such you no longer need to talk to a combat droid to pick preselected ABC paths and can instead test any and all combinations. For those who cannot access the PTS however, feel free to look!